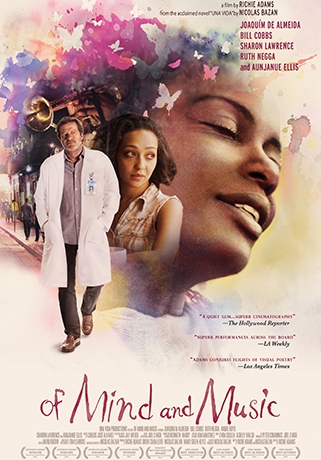 Of Mind and Music

Renowned Neuroscientist Dr. Alvaro Cruz (Joaquím De Almeida) returns home from a lecture in Paris, heartbroken and disillusioned. In his absence, his mother has succumbed to Alzheimer's disease. Nothing that his research or science could do could stop this from happening.

He decides to take some time off work and reconnect with the love of music that he shared with his mother. While finding solace in the music that permeates New Orleans' French Quarter, he hears the mesmerizing voice of Una Vida (Aunjanue Ellis) for the first time. After repeat visits to hear her sing, he discovers that she is suffering from Alzheimer's disease and that her unconventional family cannot cope with her declining health.

Una Vida's musical partner and caregiver, Stompleg (Bill Cobbs) will soon be retiring to a home out of state and her adopted daughter, Jessica (Ruth Negga) has troubling issues of her own to overcome before she can provide the real care that is needed to prevent a tragic end for Una Vida.

When Una Vida's condition worsens, Cruz surprises his wife, Angela (Sharon Lawrence) by bringing her home. Together, they work to get Una Vida into the same care-home that looked after his mother. During one of Una Vida's disturbing nightmares in his home, Cruz discovers that she was forced to surrender her only son to social services many years ago. Together, Cruz and Jessica seek out Una Vida's long lost son (Marcus Lyle Brown) in hopes of finally giving her resolution to the grief, loss and longing that has overshadowed her hard but beautiful life.