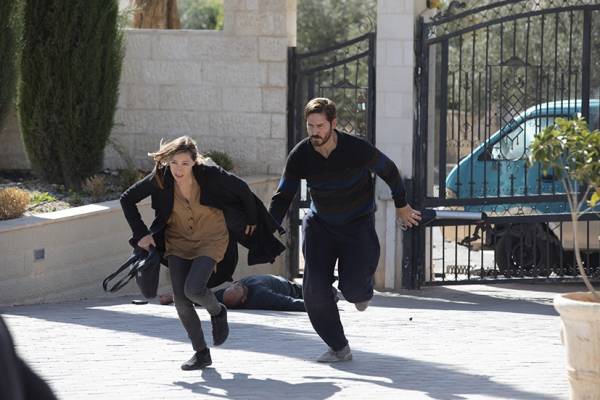 In times of L.A Screenings is running virtually, America Cinema International (ACI) is presenting very attractive films and two romances from the recognized novelist, Miralee Ferrell to the latin buyers.

One of the movies is "Infidel" which the release is scheduled for now for September 11th in the US. The film is a contemporary Middle East thriller filled with suspense and intrigue, inspired by true events, and ripped from today's headlines. Jim Caviezel ("The Passion of the Christ", "Person of Interest", "Deja Vu") plays an American journalist/blogger who is kidnapped while attending a conference in the Middle East. Taken Hostage by the Iranian regime, he is put on trial for trumped-up charges of espionage. His wife, who works for the State Department, quickly realizes that the American government can do nothing. Feeling desperate and alone, she goes to Iran to try to free him herself. This exciting story sheds light on the plight of Americans currently held captive in Iran, about whom the world has forgotten.

Another ACI film is "Emanuel" which went out theatrical in the US for only 2 days in the US and grossed 1 million. On June 17th, 2015, a white supremacist walked into a bible study and murdered nine African Americans. This is the story of the victims and survivors of that night.

From latin buyers, American Cinema International is also offering "Palau" which went out in 11 countries theatrical and tells the true story of a man who was born in a small town in Argentina, committed his whole life to the works of the Lord and embarked on an incredible journey becoming one of the greatest evangelists in history. The legacy of Luis Palau and what God can do with a willing heart will inspire people of faith for generations.

The titles of the company also included two romances from the novelist, Miralee Ferrell. In "Finding Love in Mountain View", after learning she’s been entrusted to take care of her deceased cousin’s children, an architect is torn between focusing on her career and honoring her cousin’s wish.

"From The Heart" is a family friendly film set in an Amish community. Kathy Yoder has left her Amish ways and is a successful travel guide writer. When Kathy goes home to settle her dad’s affairs, she's reminded of her life before she left the Amish community, including her old love, Isaac.